The Delusion of “Climate Control” 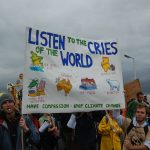 Bill has been preparing daily messages for some time, the fruit of his nightly meditations on Scripture.  Some of these have been published on Facebook.  We intend to select a few of these as topic pieces for the blog here.  Written by Bill sometime this year.

In the predawn of creation, Lucifer, the son of the morning, organized a rebellion against God. One third of all the angels conspired with him. His one objective was to be equal with God. He “said in his heart, I will ascend into heaven, I will exalt my throne above the stars of God, I will sit also upon the mount of the congregation in the sides of the north: I will ascend above the heights of the clouds; I will be like the most High“ (Isaiah 14:12-14).

The God-deniers of our day are reenacting Satan’s rebellion by “receiving not the love of the truth that they might be saved. And for this cause God shall send them strong delusion that they should believe a lie; that they all might be damned who believed not the truth but had pleasure in unrighteousness” (1 Thessalonians 2:10-12). The delusion and lie are that man can control the weather.

God established the circuits of the wind. “The wind goes toward the south and turns about unto the north; it whirls about continually, and the wind returns again according to his circuits“ (Ecclesiastes 1:6). God “changes the times and seasons“ (Daniel 2:21). He created the oceans and the transfer of moisture by means of the clouds. “For he makes small the drops of water: they pour down rain according to the vapor thereof: which the clouds do drop and distill upon man abundantly” (Job 36:27-28). Satan had to get permission from God to destroy Job’s ten sons and daughters with “a great wind from the wilderness” (Job 1:19).

In Noah’s day, God judged the wickedness of all the people with a worldwide flood. He promised that if His nation would obey His commandments, “The Lord shall open to you his good treasure, the heaven to give the rain unto your land in his season.” But if they worshipped other gods, “the heaven that is over you shall be brass, and the earth that is under you shall be iron. The Lord shall make the rain of your land powder and dust: from heaven it shall come upon you until you be destroyed” (Deuteronomy 28:12,23,24).

Notice how precise God is in withholding rain from one city or parcel of ground and not to others: “I have withheld the rain from you, where there were yet three months to the harvest: and I caused it to rain upon one city and caused it not to rain upon another city: one piece was rained upon, and the piece whereupon it rained not withered” (Amos 4:7).

“The fool has said in his heart, There is no God” (Psalm 53:1). Money and work that are spent on “climate change” are acts of foolishness. “Be not deceived, God will not be mocked: for whatever a man sows, that shall he also reap“ (Galatians 6:7) God assures us, and His Judgments will be carried out: “For it is written, vengeance is mine, I will repay says the Lord” (Romans 12:19). Our job is to warn the wicked to turn from their wicked ways (Ezekiel 3:17,18).