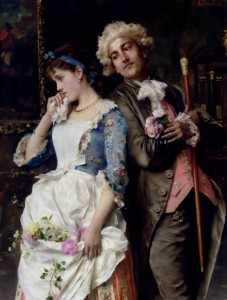 We received the following question from Dan:

“On the RG website there is an account of a woman who claims Bill asked his Board for permission to marry her. Not sure if I have this exactly correct but I think this was the essence of it. Have you ever confirmed this with either the Board or Bill? Just curious.”

To this we responded:

“Bill discussed that account with us last year. What actually happened was that Board had heard a rumor that he was interested in marrying this young woman . . . so it was brought up in a Board meeting. Bill was asked, he indicated that this was not the case . . . and that was the end of that.”

There were a few more posts, so we decided to give the topic its own thread.

The account, by “Meg” is a multipart 3rd person story serialized like chapters in a romance novel on RG.  In the introduction “Meg” states:

“And then I began to hear the rumors  . . . “Did you know Bill Gothard wanted to marry you?”  . . .  a former IBLP Board Member confirmed to me that it was indeed true that Bill Gothard had thought about marrying me. He was 59 and I was 20, barely 21 when I left.”

We did speak to Bill about this today again to clarify:

Bottom line, it is wrong to suggest that Bill initiated this discussion.  He was not then, nor ever after, a “Board Suitor”.

We had the privilege of speaking to one of the Board members who was at the meeting where this was discussed.  Points of note:

The account as told us is consistent with Bill’s version, one in which his mother and others were putting some intense pressure on him to finally relent and consider marriage.  It is also consistent with his clear affirmation that he never thought of “Meg” in a romantic way.  The much discussed Board meeting did not indicate anything different.